Tucked away in the charming by-lanes of Paris, behind a little red door, lies the secret to a cocktail lover’s happiness.

Some of the best libations are found in the most unassuming places. In dark alleys, behind hidden doors, and in rooms with little windows. In Paris, one such little door can be found at 60 Rue Charlotte, and goes by the name Little Red Door.
Yes, I know you’re not the new kid on the block and have probably read all about (if not been to) Little Red Door as they’ve bagged title after title in the “best cocktails” game in the recent past. But for the uninitiated, here’s a quick 101.
Little Red Door is Paris’ pride when it comes to fine cocktails and propagating a drinking culture that is equal parts adventurous, serious, and all-embracing. The quaint little bar is warm, friendly, without frills, almost always buzzing, and the recipient of several accolades including a very warm and comfortable spot among the World’s 50 Best Bars.
There are no prizes for guessing what makes LRD a destination for anybody visiting Paris with a palate for the good stuff. The team over at LRD, led by Rory Shepherd is dedicated to crafting cocktail experiences that are unforgettable. Every serve is backed with research and experimentation, so that by the time it reaches the guest, the drink tells its own story with each sip one takes.

Upon a recent visit to LRD, I was intrigued by their most recent menu (yes, they often change their cocktail menu concept to keep those creative juices flowing). The menu I was handed looked like a children’s book – pastel tones, pop out elements, wonderful illustrations – definitely a talking point across the bar.

Rory Shepherd, Head of Operations & Creativity over at Little Red Door, Lulu White and Bonhomie, left no stone unturned in taking me through the book, the concept, and the drinks.

I cannot even begin to do justice to the work that has been put into this project and while words will fail, they will at least scratch the surface and hopefully create some interest among those of you who are considering a trip to Paris.

The most recent menu goes by the name “Menu of Universal Values”, and is a highly collaborative project inspired by Shalom H. Schwartz’s The Study of Universal Values. I’m not going to pretend I had any idea what the Study of Universal Values was but based on Rory’s articulate overview and further assistance from google, I gathered the basic premise. The study suggests the nature of basic human values, defines the features that are common to all values, and what distinguishes one value from another. The theory further identifies 10 such personal values that are common across cultures, explains where they come from, and uses them to further reveal differences in the value priorities of individuals. The interesting part about the findings in this study though (and probably the part that is most relevant to the menu under discussion), is that the value priorities of most cultures display a similar hierarchical order. So amidst all the differences, there are common grounds that form the basis of some kind of universal truth.

The team at LRD used this theory to create “The Menu of Universal Values”. The entire exercise lasted approximately 9 months from start to finish, and involved intensive R&D where the entire team consisting of chefs, bartenders, and creatives were made to partner up in teams of two and arrive at a drink. From what I gathered through Rory’s account of those few months, there was a lot of hard work, burning of the midnight oil, and pushing of boundaries, but they all emerged on the other side with greater camaraderie, an overwhelming sense of learning, team spirit, and achievement. The challenges with a project like this usually stem from personality differences as well as differences in personal tastes, much like values themselves. To arrive at a common ground despite differences and create something beautiful from the act of unlearning and shedding inhibitions is a mammoth task, one that most likely poses tremendous emotional challenges on the person handling the task.

Nine months later, the team finally agreed to disagree and arrived at 11 drinks – 10 based on the values listed by Shwartz, and 1 because they felt it deserved a place in there: Balance, a tea based drink inspired by the eastern tradition of drinking teas in a certain order to re-centre one’s body and mind, and find balance and equilibrium.

Each drink, named after a value, reeks of experiences, travel, a great sense of community and shared values, and rests beautifully in a full spread of the book, with descriptions tucked away behind a little door, and accompanied by a wonderfully imaginative illustration by Laura Sheldon to complement the value in a beautifully abstract sense. 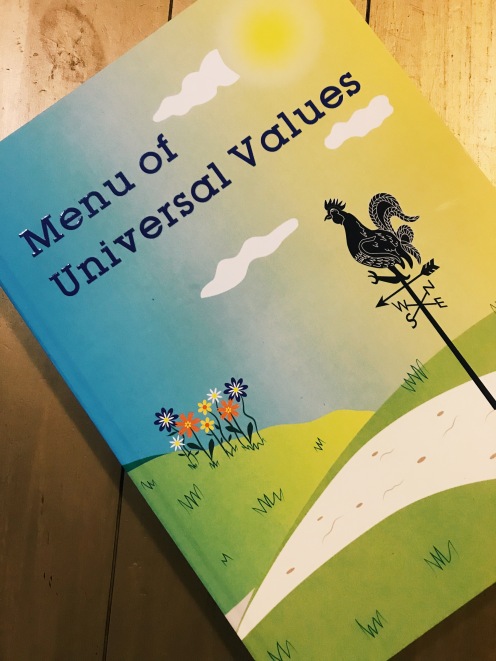 The Menu at LRD Paris

The Menu at LRD Paris

I had a hard time deciding what I wanted to drink so I let Rory make some recommendations. It’s easy to trust Rory, he just seems like the kind of person who knows. I noticed the team behind the bar working in a zen fashion – no frills, no over the top antics, just great composure, calm, and confidence.

The drinks came in at a steady pace and each one brought with it, a sense of tremendous satisfaction.

The first sip gave me immense pleasure – like floating through a vineyard, filled with a sense of positivity and purpose. The botanicals in the red wine boasted of a garden-freshness like no other, while the green apple added the right amount of tart, set off beautifully by only the slightest hint of chilli.

I fell in love with this drink by Ollie for so many reasons. From the spirit forward start to the mildly saline finish, all reminiscent of the sea and memories of travel. Subtle hints of Kombu and Aquavit keeping things real in a simple and elegant serve. This page of the menu has been illustrated using a picture from Ollie’s childhood in Devon and one can almost smell the sea and taste the spirit of adventure in it.

This serve is a curious one. Three different teas, with three very intrinsic flavor profiles. The three shot-like serves are meant to be sipped in succession of one another and in ascending order of strength. I sipped on mine slowly because it was hard to pick a favourite, but the ritual took me back to memories of reading about ancient tea rituals of the far east – disciplined, steady, and strong.

Each drink evoked a feeling that transcended the adjectives I would commonly use to describe a drink. These drinks were not simply ‘exciting’ or ‘unique’. In fact, they were moving, challenging, and deeply intriguing. They teased the palate as much as they teased the mind and took me on a sensory journey. But most importantly, what they did was tell a beautiful story and let’s face it, I’m a sucker for a good story.

It is this level of commitment and research that the team at Little Red Door has put into the menu. I did a fair bit of reflecting while I wrote this and realised how rare it is to see so much effort being put into something so seemingly simple like a menu. The collective energies of teams being channeled into 11 pages just to be able to tell a meaningful story to the person holding that drink, the months of research and teamwork that go into building something that you simply can’t ignore – it’s this level of commitment that goes into making the guest feel their trip to the bar was well worth it and more.

It is this feeling that makes Little Red Door special and the feeling that I will be going back for, over and over again.©

Have something to say? Write in to editor@thedramattic.com