We’ve been to bars all over the world. We’ve looked under rocks and found gems. We’ve met bartenders who make our hearts sing. And we’ve made friends who have stood the test of time….and shots!

The bar community is filled with charming little anecdotes and riotous stories emerging out of unexpected corners. Our sustained quest to unearth these gems through this series called #WateringHoles has brought us to the archives of one our personal favourites – Arijit Bose. Bose’s high spirited (pun intended) energy is infectious, to say the least. He’s travelled the world gathering experiences, sharing drinks with stellar people, and making irrefutably good cocktails. A man with a heart of gold, Bose does what it takes to help the community on the home turf (India) grow. His passion for the craft and his undying need to quench a thirst for a good drink is what makes him one of Dram Attic’s go-to men.

We’ll stop ourselves before someone gets teary (most likely, us). Read on as Bose shares an experience of a lifetime. We take his recommendations very seriously, you should too.

Warning! This is a Flashback

It is a well documented fact that my travel runs of most places in the world are centered around cocktails and bartenders who make fantastic drinks, run a solid ship in the local bar scene, and are internationally respected. And boy do I love finding watering holes and local establishments where the homegrown go to get their drinks on. I am going to list some down so its easier for you folks to `track them’

These have all been memorable and a place for comfort when I want to go in relax and have a conversation about other things that are not necessarily about beverages or bars. But the story I am about to tell you is about a bar that is all that, makes fucking phenomenal drinks and exudes Puerto Rican hospitality.

We were known as the ‘Kaboom Team’, a set of guys hired to run Bacardi events in some parts of the world. This particular one was a music festival called ‘Bacardi Triangle 2014’ being headlined by Calvin Harris, Ellie Goulding and Kendrick Lamar in 2014 in Puerto Rico involving three locations and small islands. Long story short, it was a hectic event and broke us all…no sleep, lots of prep (70000 drinks), 10 or 12 bars to handle with the last event on a different island so all the drinks had to be taken across in ferries, one of which broke down during transportation and so on and so forth. Friendships were lost, relationships forged forever, and copious amounts of alcohol consumed.

When all was said and done we sat down by the pool to relax and began to plan a team dinner and drinks. Macarena (yes, like the song) who now works at the Other Room in Singapore, had been in charge of man-power and on-ground local support was at the planning and suggested some place in Old San Juan.  Post a 45 minute drive or so, we land up in an alley in the old town and enter into what was to become my favorite bar 4 years and counting

La Factoria : I did not imagine that those two words would change my perception of how cool cocktail bars should be. 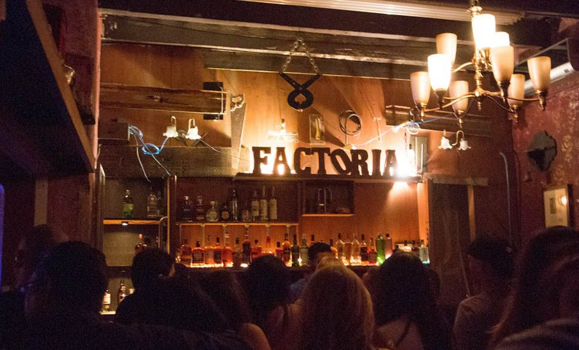 Entry: Long bar, chequered floors, super simple low hanging bulbs, open windows that look to the streets of old San Juan which was all pretty, chatter of jovial guests   but it was the music that gets you – Latin influence, reggaetón, you get the picture. We all collectively fell in love as we walked through.  The room was full and we were hungry so we got ushered into a room through a rickety, almost broken door entering into a small ‘vino’ room.

The room: This part of the bar was apparently owned by a different set of partners including a sommelier and a chef. The food was fantastic. We had our daiquiris, shots loosened us up, and we got discussing the nightmare that we all had been through while having rum cocktails.

The love at first sight: This is when Ninothchaka walked to our table to talk to Macarena and get more drinks for us, at which point I had already fallen utterly into the love cauldron. A bartender and supervisor at the place, she began to explain that the bar has 4-5 parts and the most interesting part was room number 4 where there is ‘some dancing ‘and the vibe is fantastic.

The ladies got excited but of the rag tag group of gents, there was only one Argentinian who knew anything about close quarter, sexy Latin dancing. The rest of us shrivelled up just a little bit. More drinks, shit jokes, more loosening up, and we agreed to the dance crash course.

The dance floor: Nino vanished for a bit, we discussed how to tackle the situation. In comes another round of shots and she says “Guys don’t stress. I just gotta work for a bit, I will then take you guys, teach you a bit of the salsa and we take it from there”. At this point the drunk me has reached ‘Mills & Boons’ level of romance in my head. Mildly high, we all agreed and got led into this room through the restaurant where a ton of people were just going nuts dancing. Nino took Jamie Mac for a quick few lessons and then passed him onto another lady on the floor to dance with. Then led Remy who picked up the moves pretty quick (apparently Latin dance is big in Lithuania) and decided to go try out his newly acquired skills on others. Nino gave me a few quick lessons and given the beats of the song playing, it was not all that hard or maybe the amount of alcohol in my system convinced me that I could actually pull this off. This was absolutely the best time I had ever had at a bar as a guest, and not a bartender.

The people of Puerto Rico are warm, know how to party, and just a ton of fun. I made some really good friends. Even during the time that city got hit by horrible hurricanes, a number of times I remember chatting with them and they seemed to treat it like just another day. Resilient yet fun, these folks are and therefore Puerto Rico, will always be my top city to suggest people to visit.

We ended up trekking three more days in a row to the place and wondered how the fuck was this not on the list of best bars to visit in the world. You see, a bar to us is more than just a place that makes great cocktails or has the best lighting. It’s about the people who are behind the bar, the guests who breathe life into the ambience and the positive vibe that it creates. To me that is a damn good watering hole and will always be one of my fondest memories drinking through this labyrinth.

Since then, Nino and I have been good friends and now she is on her way to Chicago to spread on the quest of fine beverage service. By 2015 La Factoria was 45 on the list of best bars, moving up to 39 by 2017. They have been doing it right.

And guess what, most of you have seen part of La Factoria…remember the song Despacito by Luis Fonsi and Daddy Yankee which was later remixed with Justin B? The video was shot there. So if you ever end up in Puerto Rico, you make sure you go meet Robert Berdacia and his crew, buy them shots and say thank you from us folks on the other side of the world.

Have something to say? Write in to editor@thedramattic.com